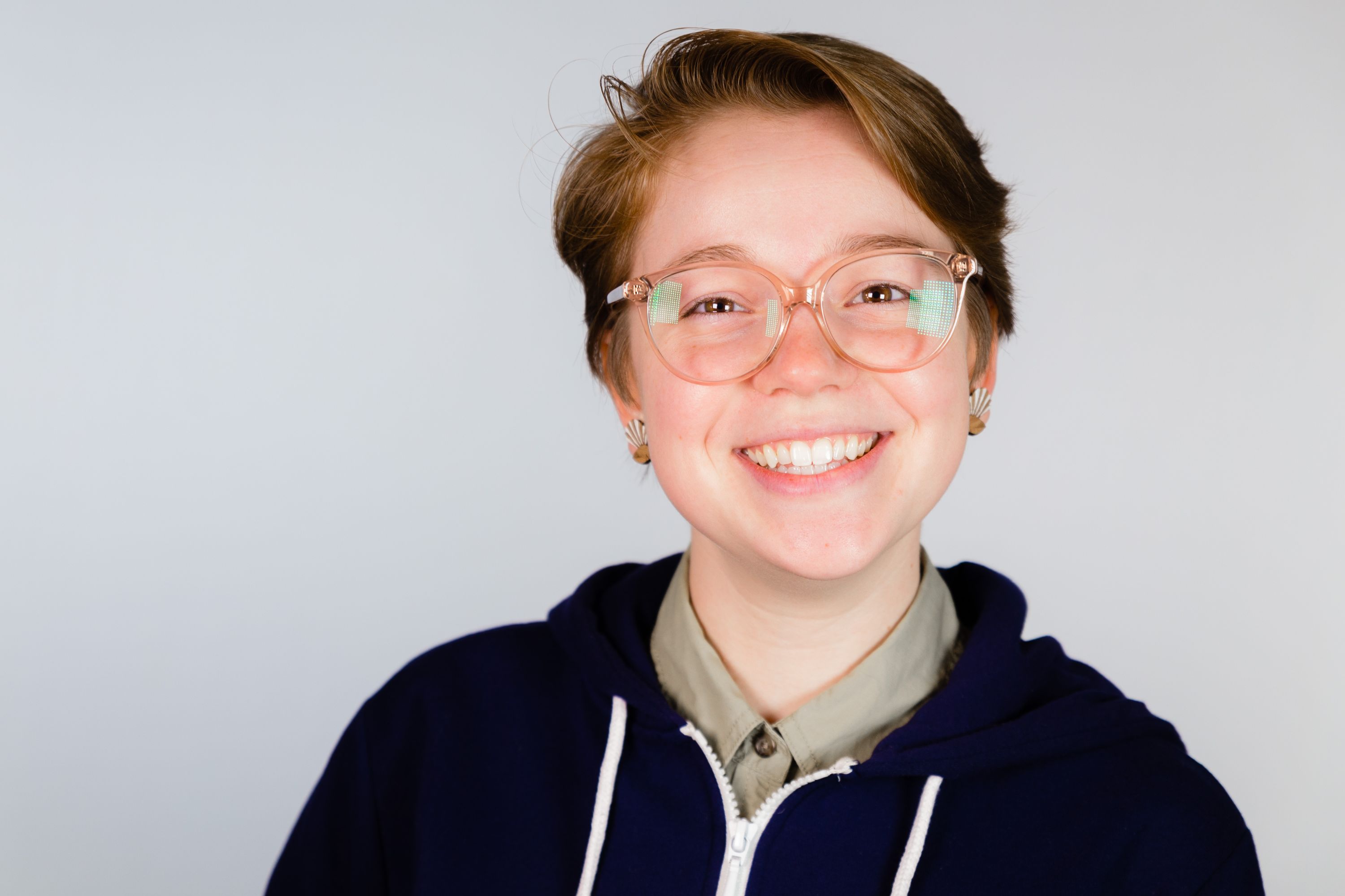 Allie Shapiro
Allie (pronouns: She & They) is a Chicago based writer, visual artist, vegan, and TV sitcom enthusiast. With a degree in Comedy Writing and Performance from Columbia College Chicago they spend most of their time writing and illustrating comics that can be found on their instagram (@allieshapiro). Her visual art has been featured in coffee shops and cafes around the city of Chicago. When they're not creating, Allie can be found rewatching The Office and making crepes.

Dress for the Gay you Want (blank) V2

I am pleased and proud to announce that I’ve done it. I’ve found the haircut. My haircut. Well, technically I didn’t find it, Corrine - the wonderful human who cuts my hair - did. But boy has it been a journey to get here. My voyage began a year ago. It was the dead of winter and I was ready to take the plunge in cutting my hairs for the queer reason. Not to say you gotta have a short haircut if you’re queer - there’s lot’s of queers and humans on every spectrum with lots of different kinds of hair cuts - but for me, yeah it was absolutely about my gayness. As a person born in a female body going for a short cut was part of my coming out process. At the same time, I didn’t want to fulfill anyone’s expectations of this big gay milestone for me. I had just gotten out of a box, I didn’t want to be put in another one.


But forget what other people think! After debating it for a while I finally decided to get rid of the straight confines of my shoulder length bob. The first place I went to told me my hair simply could not be cut that short and they gave me an even shorter version of the bob that I had, giving me a striking resemblance to Lord Farquaad from the “Shrek” universe. The second place hit me with the same sexism and inexperience saying “your hair won’t do that.” Two salons, a bunch of tears, and a super expensive cut from a fancy salon that my partner helped finance later and I finally had it. The wind on my neck, the breeze on my ears, and the savings of not having to buy shampoo as often.


My story did not end there. I was terrified to get my first trim since ridding myself of my longer hairs because I liked the way it looked and didn’t want anyone to mess with it. This was my identity we’re talking about here! But nonetheless it needed a trim. I spent five months getting my then pixie cut trimmed by women who would ignore my pleas to have it shaved in the back, keeping it pretty feminine and not what I was looking for.

Exhausted from fighting with women about how I wanted my hair to look I asked for help. I confided in the queers who had a look I liked and asked them where they went. Luckily in my area there are two gay friendly salons and I tried out both. It is now a year after I first heard my hair was impossible to be cut short and my gal Corrine shaves the sides and back of my head, keeps the top long, and has introduced me to a product that works perfectly with my hair type. I feel queer, I feel me, and mostly I feel freezing because I live in Chicago and a buzz cut is chilly in this wind.

I am out of the woods now and feeling like a haircut wizard. I am here now to bestow my advice and knowledge upon you. Here I give you my six tips to finding the cut that gives you the most confidence.

1.  If this is your first time going for a cut that matters to your identity, sexuality, queerness, etc. bring a trusted friend with you. It’s nice to have an advocate nearby for the especially pushy stylists who refuse to do what you want.
2.  Do your research. Look up cuts that inspire you or if you see someone at the coffee shop you frequent that has a kick ass cut ask them where they got it done. Even with social anxiety it’s worth it to find the land of milk and honey when it comes to a fresh cut.
3.  Take pictures along the way. When I was searching for my dream hair cutter and even when I found her I would come in for a trim and forget what I liked or disliked about the cut a month ago. So I started taking pics right away when I got my hair cut so I could bring it in and I’d waste less time hemming and hawing over my identity before this person I barely knew. Now Corrine knows me well enough to know what number I need for the sides and that I like to experiment with how long the top is. Wow I think I might ask her to meet my parents.
4.  Try out different products. For me personally it was worth it to get the expensive stuff. I’ve been able to find products at cheaper prices that work well enough but for me it’s an expense I’ve decided to put invest in because I truly feel better when I know I’ve got my look down. So I use “Redken Brews” - recommended by Corrine the genius - or “Got 2b mess-merizing putty” by Schwarzkopf from Walgreens if I am trying to save funds.
5.  Try out different places. No matter your gender don’t feel confined to the systems at play with traditional salon culture. Try out a barber too! You don’t have to stick to a woman stylist if you’re a woman or a man stylist if you’re a man. I was going nuts watching all the men walk away with real great cuts while my female stylist kept my pixie long and femme.
6.  Lastly and most importantly - hair grows. My favorite part of my year of hair discovery has been that with a short cut it would grow out quicker. It was a lot less intimidating to try new things with my short cut knowing that it would grow out in a month and I would be able to try something new. Even if you’re not looking for a shorter cut remember that it will grow out. I know how frustrating it is to not feel yourself when your hairs aren’t doing their thing but honestly it’s worth it to find the best you.

So get out there! Stick to your guns when you go and remember that it’s your head and you’re in charge of what goes on top of it.